This is the first post in KPI's Power BI blog series. In this blog, we provide a high-level overview on visual interactivity in a Power BI report.

Power BI visuals in a report page are interactive among each other, by default. An item selection in a visual impacts the rest of the visuals by highlighting the related items. However, do we get the required clarity in visualization? What if we need to display Totals, which should not be impacted by selection in any other visual?

Let us build few visuals on our invoice data 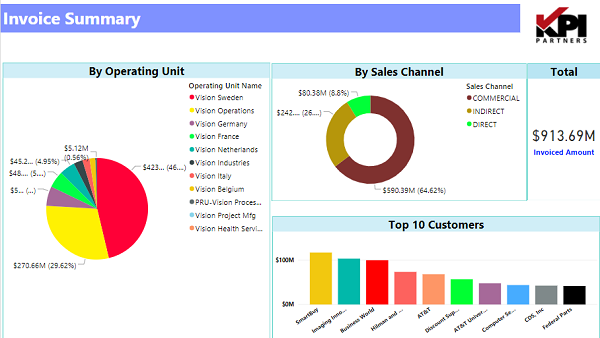 When we select an item in the first visual, the related items in the second and third visuals get highlighted as shown below.

In the above report, Operating Unit Vision Sweden is selected in the first Pie Chart, and related values in second and third charts get highlighted.

However, the second and third Charts lack clarity. It is hard to visualize which items got selected. To improve the readability, instead of highlighting in the pie chart, we can use filter to have better insights.

How to change the interaction?

To change the interaction of a chart with other charts on the report page, select the chart for which you want to control the impact on other charts, and then from Visual Tools menu, under Format, click on Edit Interactions.

All other visuals in the page will appear with two or three buttons (Interaction control buttons) on the top right-hand side corner of each.

The darker colour in this icon set shows which interaction will apply.

Let’s change this interaction to Filter. See the difference in second and third visual after an item selection in first visual. Doesn’t it make more sense, better visual appeal as well?

The interactivity can be set to None as well which helps us in case we want Totals in a visual.

Invoiced Amount when there is no selection in the first visual

The impact on Invoiced Amount when there is an item selected in the first visual – No Impact!