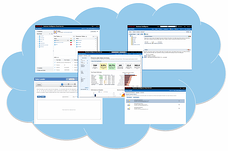 The cost of cloud migration is not cheap but the promise is that the company will acheive a significant return on investment over the long haul.  The objective of this article is to help us understand how to setup Development and Production environments in the cloud, specifically regarding these components of a data warehouse (DW):

There are multiple options to set up a data warehouse in the cloud.  For ease of understanding, we can examine one setup that has worked successfully and extrapolate from there.

For example – we could host a database like SQL Server/Oracle, ETL related installations of Dell Boomi Atomsphere®/Informatica Cloud and a reporting tool like Tableau/OBIEE on a Microsoft Azure Platform.

Installing all the components on one server is not recommended.  The Reporting Tool is ideally installed on a one box and the ETL Tool and Database on a separate box.

There is the option of using a cloud-based ETL tool such as Informatica Cloud or Dell Boomi.  Even though the ETL Tool is hosted on the cloud, a few other components, like that of an ‘Atom’ or ‘Secure Agent’, should be installed where the target database resides.  This helps with scheduling jobs, identity management, and specifying connection details between source and Database.

A Quality Assurance (QA) environment could also be leveraged, but that would increase the cost.  As environments are added for Development/QA/Production/Other purposes, the cost for PaaS increase proportionately.  Apart from the licensing costs, additional time is spent every time we migrate the code from Dev to Prod.  Based on business requirements, we need to decide on the number of migration steps we want to introduce between Development and Production environments.

If we use Informatica Cloud, then we will have separate accounts for each environment. Here we need to use the ‘Migrate Objects’ option from the destination location (Production) and specify the source account credentials (Development) in order to move objects from source to destination.

We have to be extra careful when we are migrating ETL related objects and ensure that the connections are all pointing towards Production sources and targets. The references to objects in Development shouldn’t be present in Production objects.

This is accomplished by first installing the appropriate BI Tool on the Production box.  Then we open the data-sources and workbooks that need to be migrated into the BI tool and change the connection to point to the Production Server and publish them to Production.

In Tableau, we can automate the publishing of workbooks by the use of the tabcmd utility which comes along with Tableau Server.  We can use the same command line utility to import the users from Development to Production.