Stephen Few designed the Bullet Graph as a way to display measurements vs. goals or other benchmarks. The screen shot below shows bullet charts in the column “MTD & Proj Comp MAgo” (Month to Date and Projected Expense Compared to Month Ago). 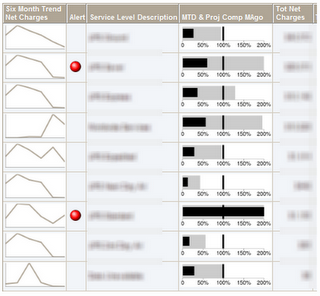 These bullet charts are done using the google charting api.

To generate these bullet charts OBIEE needs to generate a url that contains the right parameters. Other web sites have done a good job documenting the parameters of the url. For example, see http://dealerdiagnostics.com/blog/2008/05/create-bullet-graphs-with-google-charts-in-7-easy-steps/ .

In this case, the url includes several parameters, each separated by an ampersand, and breaks down like this:

The only two parts of this that reference data from the query are the parts highlighted in yellow and purple.

The yellow formula draws the gray bar (color = #CCCCCC) that starts at 0 and ends at a point represented by the fraction being computed by the yellow formula. The formula multiplies the total net charges for the current month by the Projection session variable (days in month/current day of month), then divides that by 2 times the total net charges last month. Since this is going to be part of a url and has to be concatenated with other text, the cast as varchar is needed.

The purple formula is the length of the black bar. Again, that is expressed as a fraction (actually here, a percentage) of 2 times the expenses of the previous month. The cast as varchar is needed here, too.

It’s a little inconsistent in that the black horizontal bar is represented by a number (0 to 100), while the gray bar starts at 0 and extends to a number that has a value between 0 and 1 (projected expense/(2 * MAgo)). The black “vertical line” is a bar that starts at 0.49 and ends at 0.51.

The final step is to set the column’s data format to Image URL. 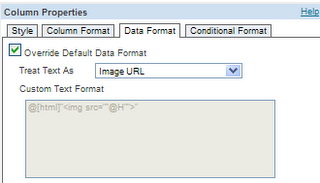